In our beautiful Upper Lansdowne Memorial Hall is a WW2 Honour Roll. On this board is listed 70 names. These men and women left the Upper Lansdowne to fight overseas in WW2.

Of the 70 names listed, five men lost their lives. They were: 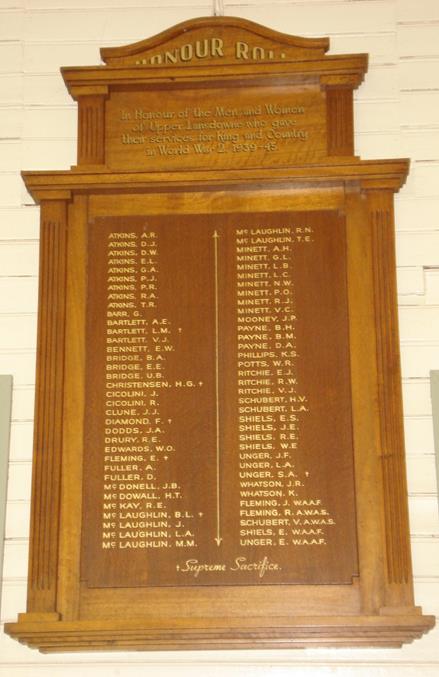 The seventy names listed are:

The Northern Champion reported another gathering at Upper Lansdowne Hall on 9 September 1941 to farewell Aircraftsman Eric Bennett who was the 21st young man from our district to join the fighting forces.

A number of other men from our district were part of the Volunteer Defence Corp on the home front. They were:

The Northern Champion reported that on 24 November 1946 a ceremony was held in the Upper Lansdowne Memorial Hall where more than 200 residents witnessed the unveiling of an Honour Roll and the photographs of four of our boys who paid the supreme sacrifice while on active services.

If anyone has further information or photos relating to any of the soldiers listed on our WW2 Honour Roll, we would appreciate it if you could contact us.