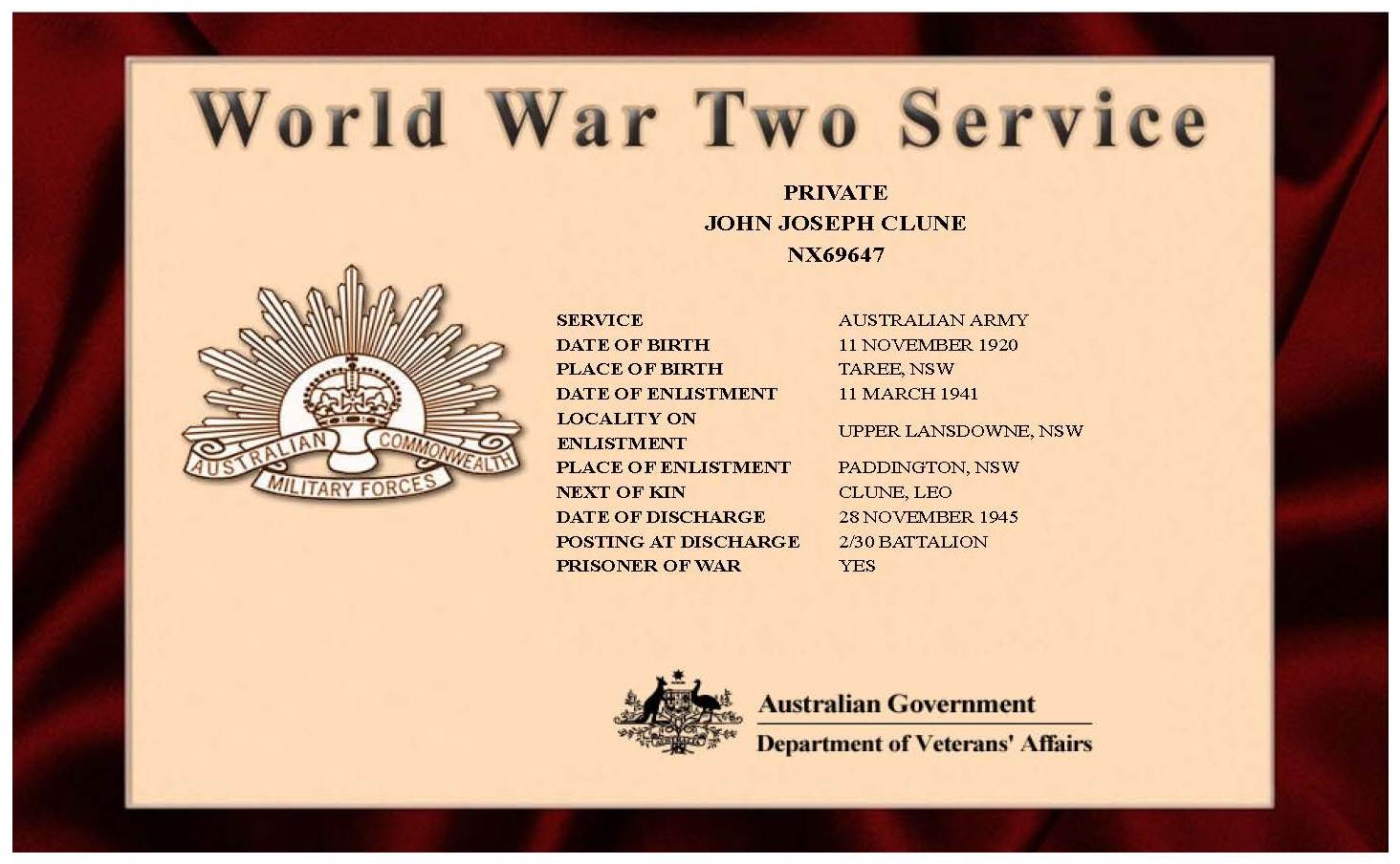 The following is taken from Jack’s obituary which appeared in the Manning River Times on 1 November 1995.
This is the eulogy delivered by Bob Coombes at the funeral service on 26 October 1995.
On Monday 23 October the Manning Valley lost a great mate and true Australian in the death of John Joseph Clune (known to us all as Jack).
I am deeply honoured to have been asked to deliver the Eulogy at Jack’s funeral – this is probably the most difficult task one can be called upon to do – as it is difficult to find words to fully express one’s feelings under these circumstances.
Jack was the first born of thirteen children to Leo and Rita Clune of Upper Lansdowne on Armistice Day, 11 November 1922.
He attended the Upper Lansdowne School and worked on farms in the area until enlisting in the AIF during World War II. After basic training he was sent with the 2/30 Battalion 8th Division to defend Singapore. We all know of the debacle of Singapore and Jack, like many thousands of other Australians, found himself a prison of war of the Japanese – he was just 19 years old.
He soon found his captors to be barbaric people who subjected their prisoners to unbelievable cruelty. Here was this teenager from a quiet peaceful farming community suddenly finding himself existing in an unbelievable environment of death, torture, disease and hunger – but with great fortitude and determination to survive and with the great comradeship and brotherly love that existed between POWs and their determination to help each other.
Jack was one of those who managed to overcome all odds and survive. Although only a shadow of his former self he returned to his beloved Manning in 1945 – not a teenager – but a grown man who in four years of captivity had experienced more hardships than many would experience in a lifetime.
Upon his return he took up farming. It was then that he was introduced to Una Atkins of Mitchells Island and they were married on 5 November 1946 on Jack’s parent’s Silver Wedding Anniversary.
He and Una farmed at Oxley Island where in 1947 son Errol was born – later the family moved to Mitchells Island.
In 1965 Jack joined the staff of the Manning River District Hospital as a wardsman. He worked there, becoming senior Wardsman until 1982 when he retired. Many who were patients during that time will remember Jack for his kindness, service and dedication to their welfare and comfort. Out of working hours Jack did many personal favours for those confined to hospital and after discharge he would visit their homes to check their well-being.
He joined Taree RSL Sub Branch in 1946 and was elected to committee in 1971 and held positions of vice president and senior vice president until the death in 1986 of sub-branch president Eric Lowbridge when Jack was thrust into the presidency. Under his leadership the sub-branch pledged $25,000 to the hydrotherapy pool for the Manning Base Hospital. This pledge was finally met in 1994 when the pool was opened at Wingham A & R Wing. He retired as president, due to failing health in 1991, when he handed the reins over to Vietnam veteran Gordon Greaves – Jack was adamant that younger veterans take over management of sub-branch affairs. Jack remained on committee until February 1995 as senior vice president.
For his dedication to his fellow veterans Jack was presented with life membership of the RSL of Australia in 1986. He represented the RSL in all aspects in our community, through churches, schools, Manning Valley Senior Citizens Homes and in March 1989 he was instrumental in the formation of Taree Sub-branch’s two sponsored day care clubs.
He was vice president of the local Ex POW Association for 30 years and always maintained a close affiliation with the 2/30 Battalion Association based in Sydney.
He was a director of Taree RSL Club Ltd for three years.
Jack was also involved in other community groups such as the Mitchells Island Community Hall and Progress Association. And of course he was renown for sharing his farm produce with all and sundry. He was always seen at local shows supporting Una while she showed her sheep and winning fleeces. In years past, with son Errol he was involved in Pony Club and Rural Youth events. He was greatly proud of their achievements.
Jack showed great fortitude in his last battle with cancer and many willingly shared this battle with him to repay past kindnesses.
To use the words of Jack Clune: “We all loved you, Jack and we thank you for everything”.