Newspaper Clipping from the Manning River Times and Advocate, 19 August 1925

It is just thirteen months ago, that the residents of Upper Lansdowne considered the advisability of erecting a memorial hall and held a public meeting at which it was decided to proceed with the work. On Wednesday, 5th inst., Mr Vincent MLA opened the newly completed hall which from every point of view, is a modern and handsome edifice, fitted up with all conveniences and electrically lighted throughout. The fact that this fine hall was built in such a remarkably short time speaks volumes for the organising abilities of those who supervised the undertaking, and the enthusiasm and generosity in subscribing to the building on the part of the residents. The hall was built at the cost of £850, but it would have cost a great deal more were it not for the fact that a portion of the work was performed by voluntary labour. At the opening function the sum of £102 was received in the form of donations, including £43 taken at the door.

A full description of the building, which occupies a splendid site, has already appeared in our columns.

There was a large gathering of the Lansdowne residents as well as a number of visitors from Taree and various parts of the Manning to witness the opening function. A first class programme of sports was carried out during the afternoon and at 3.30 pm the visitors gathered in front of the building to hear the addresses of the speakers.

Mr W McLaughlin, president of the committee gave an interesting resume of the history of the movement to build the Memorial Hall and thanked residents for the generous response they had made to the call for funds. He hoped they would continue to take an interest in the hall, which was a credit to the district. He especially thanked Mr Vincent for his presence. He was a Digger and one of the best. He had fought their battles on the other side and was now fighting in the interest of Oxley in Parliament. Mr Vincent was then invited to open the hall.

In declaring the hall opened Mr Vincent said the wet weather had necessitated the postponing of the opening function some months ago. He came to Taree from Melbourne before he found that the event had been postponed, the message that had been sent to him notifying of the postponement having managed to miss him. It was not his intention to touch upon political matters that afternoon but he thought that some reference to repatriation would not be out of place. When the soldiers returned from the war, the Commonwealth launched a repatriation scheme to settle them on the land. Land values were then at the peak and had since declined with the result that today soldiers were on properties which were highly overcapitalised and on which it was not possible for them to make a success. It was pleasing to see that the Commonwealth Government had come to a realisation of the position and had decided that if the States would do something similar they would drop these valuations by £4,000,000 or £5,000,000. If the States would do this the soldiers would be on a better basis, with a chance of making a success of their holdings. If something drastic were not done to stop the rot the majority of the soldiers would be forced to leave their holdings and the Commonwealth would lose more than it would by taking time by the forelock and making a reduction of the valuations. Australia was one of the youngest countries but she had, through the courage of her sons and daughters, gathered a wealth of tradition which would be a source of inspiration to the people for ages to come. Rome, in all her glory, had no more reason to be proud of the feats of her soldiers than Australia had at Gallipoli, France and Belgium. Our soldiers went to fight for civilisation and the world, not for the Empire or Australia alone. Australians were born in an atmosphere of freedom and sunshine and when the freedom of small nations was threatened they joined hands to prevent those people from being trampled underfoot. There were 60,000 Australians lying on foreign soil which was sufficient testimony to the high price they were ready to pay for their ideals. Sometimes the question was raised as to whether the price paid was too great – but was any price too great for freedom from the bestiality which ravaged France and Belgium in 1914? Every soldier who paid the supreme sacrifice would do it a thousand times to safeguard Australia from the treatment which France and Belgium received at the hands of the Germans. If the people lived up to the ideals shown by the soldiers, the price paid would not have been in vain. Of those who remained there was a duty of seeing that Australia was built up as a sanctuary for the British races. The people of the various towns throughout the Commonwealth were perpetuating the memory of those who fought. At Upper Lansdowne the people had erected a memorial hall wherein they would be able to gather to discuss matters for the welfare and progress of the district. They would never forget, he felt certain, the reason for the erection of the hall. With the passing of the years the building must decay, in keeping with all things earthly, but the memory of those whom it commemorated would endure for ever. The residents were to be congratulated on the erection of such a fine hall. At West Wyalong he recently opened a hall which cost £10,000, but there were 10,000 residents in that district. With a population of 300 or 400 Upper Lansdowne had erected a hall worth £1000 at least so that in comparison they had done better than the residents of Wyalong.

Canon Ritchie expressed the pleasure it gave him to be present. He was glad to see they were commemorating the memory of the men who fought and fell in the Great War. No need was there to tell of the bravery of the sons of Australia. Right valiantly they marched forth to the field of battle, fearing not to die in the cause of right. He did not think it was a waste of money to build memorial halls. Millions of pounds had been spent by the Empire in memorials so that the self-sacrifice of the soldiers would be remembered. Self-sacrifice was the means by which the Empire could be built up. He was proud that when the call to duty came our men did not hang back. They did well and the people should honor them and remember their spirt of self-sacrifice. The builders had put forth their best work in the construction of the hall, which he hoped would serve its purpose for many years to come.

Mr H Hammond recalled that in 1882 he pitched his camp on a site near the hall that had been opened that day. The country then was covered with scrub and when he left his tent he did not go too far as he feared he might become lost. He was of opinion that that part of the district had advanced more in the past years than any other centre on the North Coast. The only drawback was the bad state of the roads. Some parts of the roads over which he had travelled that day were not as good as those which he traversed 43 years ago. The roads between Cundle and Lansdowne Bridge were very bad. In another 30 years, if the district continued to make such progress it would be one of the finest centres in Australia.

It was explained by Mr McLaughlin that the committee did not have sufficient funds to light the hall when it was completed so Mr Jas. Ritchie agreed to install the electric light and accept repayment at the convenience of the committee. The district was under a debt of gratitude to Mr Ritchie for his generous action.

The appearance of the hall, said Mr Fennings (treasurer) had been much admired by the visitors. Over £200 was subscribed when it was decided to build the hall. People of the district were very patriotic. This was shown about ten years ago when certificates were awarded to schools raising the largest sum for the War Chest, in proportion to attendance, one of which was gained by the Upper Lansdowne School. He hoped that they would make a real Memorial Hall of the new building by making the returned soldiers life members. There was a sum of about £688 remaining on the hall to be paid off.

A vote of thanks was moved to Mr Vincent for opening the hall.

At the conclusion of the meeting afternoon tea was served in the supper room. At night a concert was held in the hall. 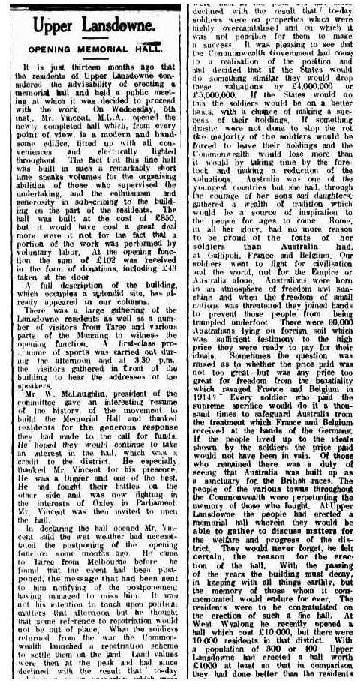 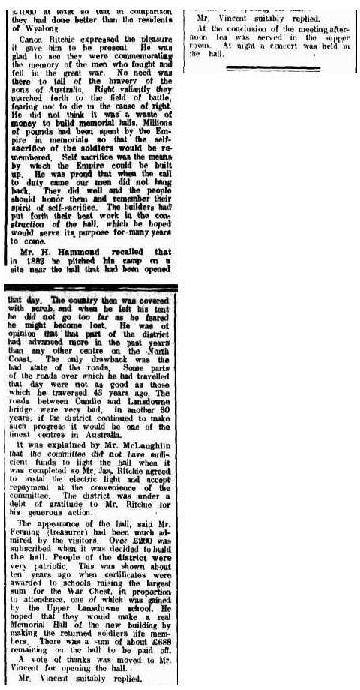