Skip to content
NORTHERN CHAMPION (TAREE), SATURDAY 9 NOVEMBER 1946, PAGE 6
MEMORIAL PHOTO UNVEILED LATE ERIC FLEMING OF UPPER LANSDOWNE
On Saturday, 20 October, a large number of friends gathered at the Upper Lansdowne school with Mr and Mrs S Fleming and family, for the unveiling of a memorial photo of their only son and brother, Eric, who died of illness whilst a prisoner of war in a Japanese prison camp, on 7th January, 1944.
The proceedings were opened with the National Anthem, after which the chairman (Mr V L Hall), president of the local Parents and Citizens’ Association, which paid for the photo read messages of sympathy with the bereaved.
Mr C K Bennett conveyed the sympathy of all to Mr and Mrs Fleming and daughters in their sad loss. He paid tribute and honour to Eric, whose passing they regretted, as he was a young man, full of hope and zeal and highly respected. One of the most tragic sides of war, especially in the Pacific, was that the casualty list was ??? after the war ceased, when the results became known.
Mr W S McLaughlin said when the news of Eric’s death came he felt he couldn’t go soon enough to the Fleming’s home, for he had lost a great friend. They had worked together quite a lot and he found him very broad-mined and that, with other sterling qualities he noted, he attributed to Eric’s home training.
Mr A Jones said this historic event in the school would speak to unborn generations as they saw Eric’s photo. He urged the boys and girls to be patriots in all things. He conveyed his sympathy to Mr and Mrs Fleming and congratulated them on having such a fine son.
Mr J R McDonald said he always found Eric bright, cheery and full of energy. He was a brave boy who went out in service for his country. The said blow had come, but what was the cause of all these sad blows! There was no hope of permanent peace while the world goes on as it is doing and neglecting Christ and His teachings.
Mr A Rae read a tribute from Eric’s former teacher, Mr J Davy. During his 32 years as a teacher, Mr Davy said, he had learned to discern the sterling character from the dross, and Eric’s was of the sterling character. He loved only the good things of this life and always played the game.
Rev R A Munro said he considered it a very fitting memorial to be set up in the school, for peace terms were signed by the Germans in a little school room in France. War was our greatest scourge and in read the Bible he had come to believe we would always have it, for history showed more years devoted to war than peace in this world. It was inspiring to find young people ready to leave their homes, and Eric had died for the defence and preservation of things British people loved so well. He and others in laying down their lives, had taught us negation of self. Rev Munro said people will always cherish and revere the memory of Eric Fleming, who little thought he would be called forth to unknown dangers, but death is merely a transition, and life goes on beyond the grave in a fuller sense.
While all stood Rev Munro unveiled the photograph.
As a token of gratitude and appreciation of Eric’s sacrifice, Mr A Rae presented Mr and Mrs S Fleming with a Certificate of Merit, duly signed by the president (Mr V L Hall) and secretary (Miss E McDonald) of the P and C Association, on behalf of the members. 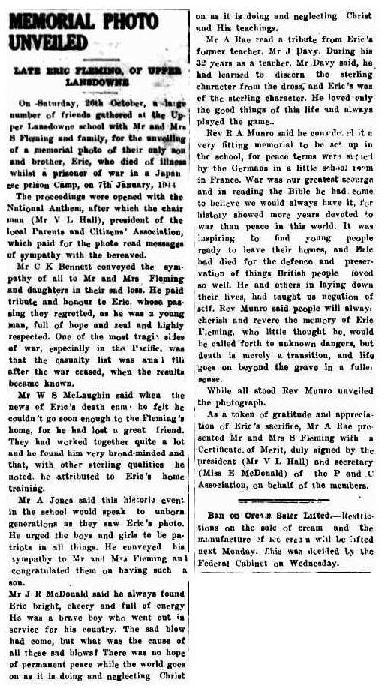