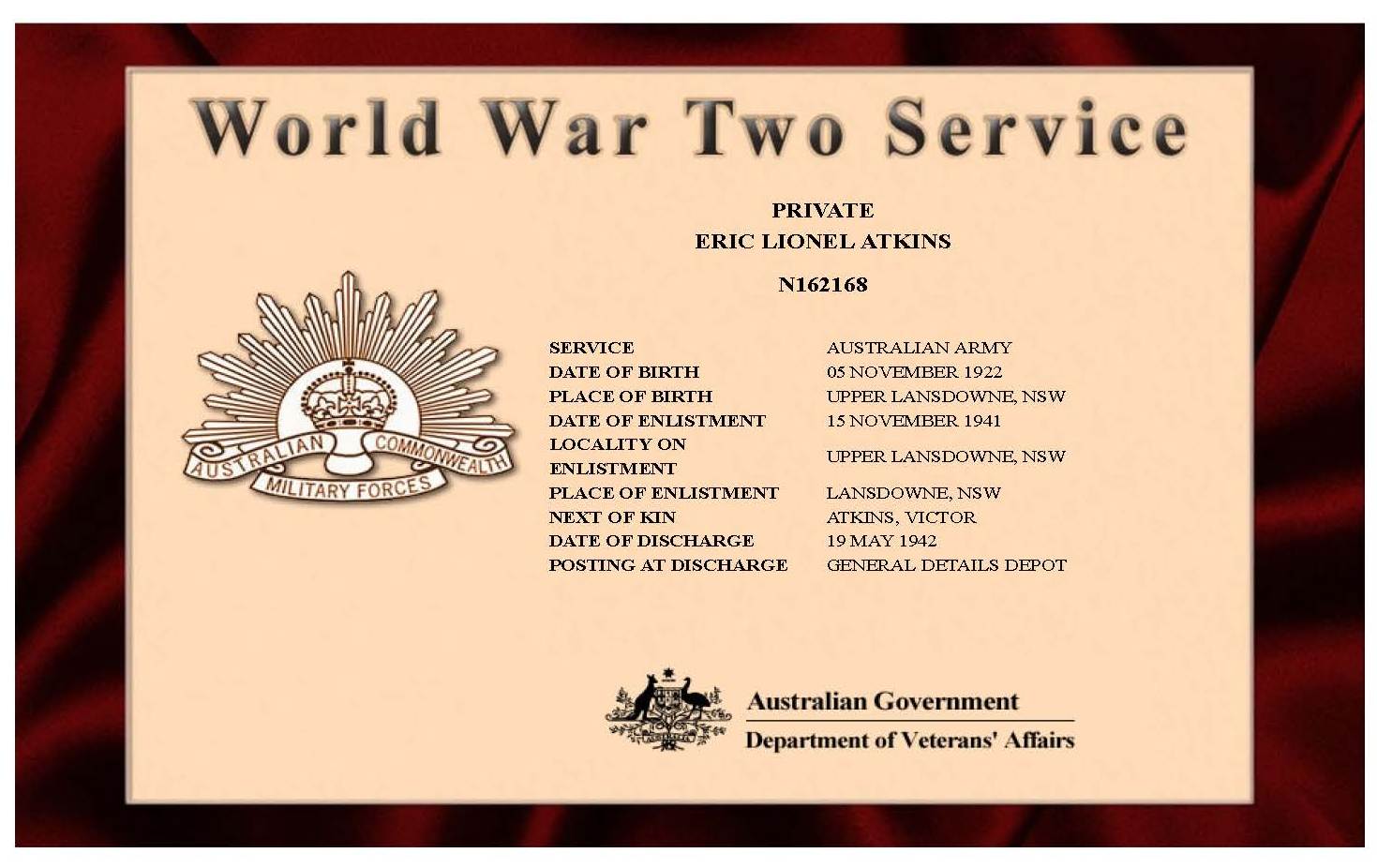 Eric applied for both the Army and the RAAF. The Army posting was the first to be offered to him, so he accepted as he wasn’t sure he would be accepted by the RAAF which was his preference.

Eric served in the General Details Depot of the Australian Army at Dubbo and was discharged from the Army on 19 May 1942 to enable enlistment in the RAAF. 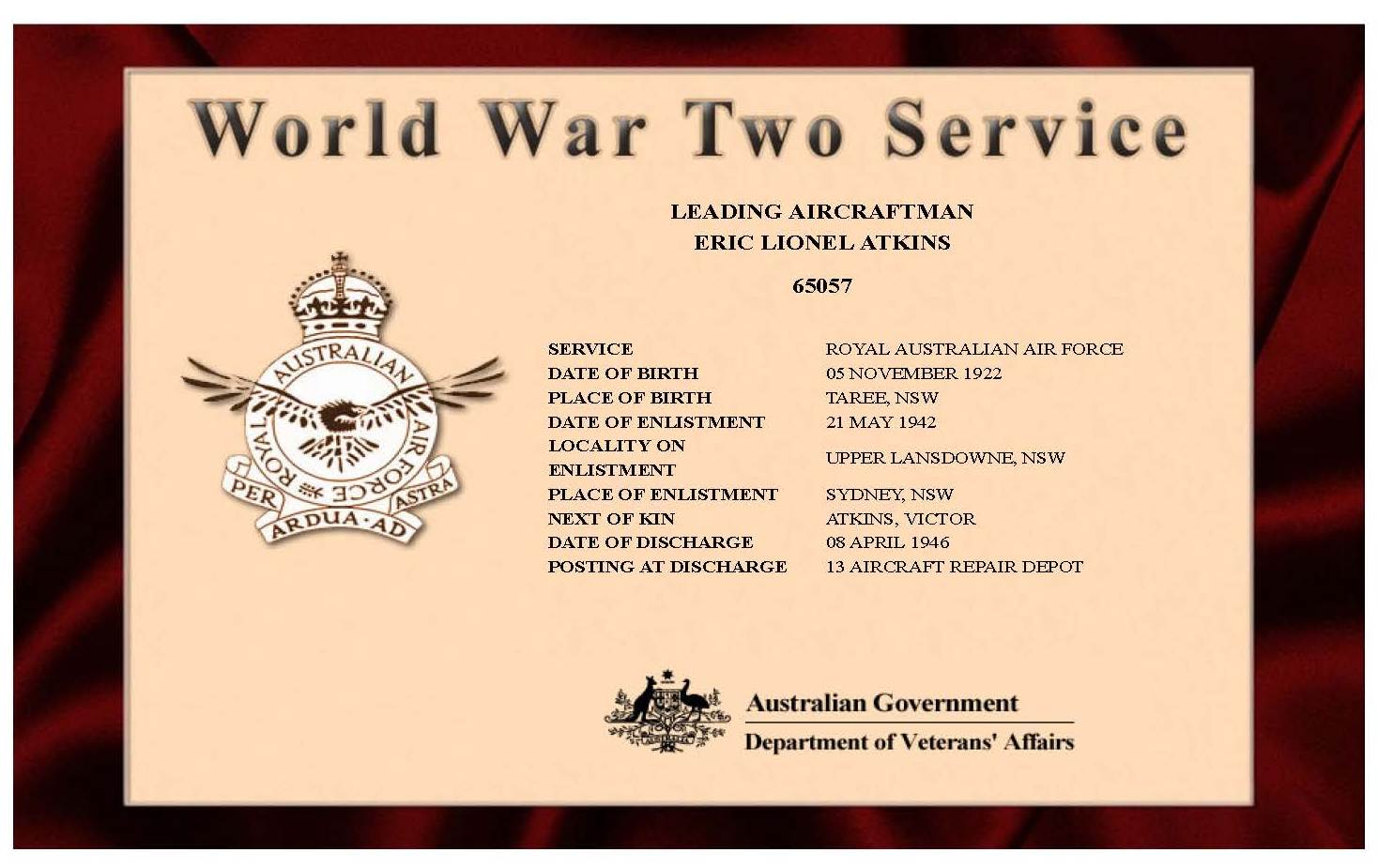 After Eric was discharged from the Australian Army he enlisted in the Royal Australian Air Force on 21 May 1942. 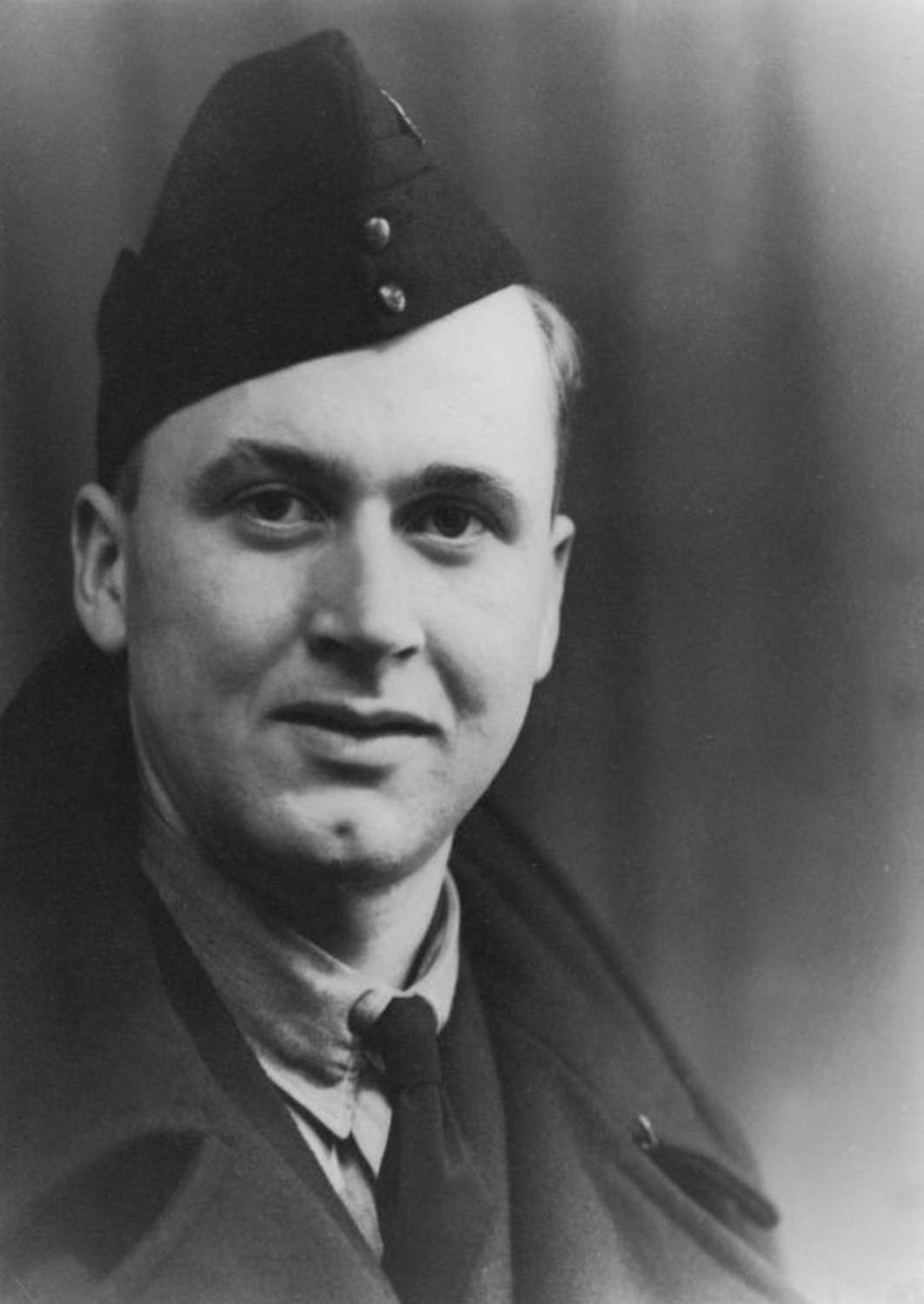 Eric’s initial training 7 June 1942 to 31 July 1942 was with Trainee Group V at Rocklands in Victoria. He was then transferred to 1 School of Technical Training at Ascot Vale, Vic to complete The Flight Mechanics Course 3 August 1942 to 3 October 1942. This qualified him to work on Airframes.

He then completed the Fitter IIE course 29 October 1942 to 6 January 1943 at Ascot Vale. Eric was posted to No. 7 Service Flying School at Deniliquin on 14 January 1943.
On 7 July 1943 he was promoted to the Rank of Leading Aircraftsman.

17 June 1944 saw him posted to No. 55 Operational Base Unit at Gorrie Airfield in the Northern Territory (west of Stuart Highway and 65 km south of Mataranka). He was then assigned to No. 1 Squadron on 27 June 1944 where he worked on the Beaufort Bombers that operated from that airfield.

On the 19 February 1945 he was transferred to 13 Aircraft Repair Depot at Breddan which was located just north of Charters Towers in Queensland. After the war ended, he was briefly posted to 35 Squadron based in Townsville (28 February 1946 to 13 March 1946) until his discharge on 8 April 1946.

During the time Eric was serving at Breddan, he met his future wife Norma Adkins, who had moved with her mother to Charters Towers from Normanton in response to fears of the Japanese Invasion. Eric and Norma married in Charters Towers on 15 March 1947.

After the war Eric and Norma helped work Eric’s father’s dairy farm at Upper Lansdowne eventually taking it over completely. Eric was also a builder. Eric and Norma had three children: David, Erica and Robert.

In late 1982 the farm was subdivided and sold as 4 separate lots and Eric and Norma retired to Taree.

Eric was involved with St Barnabas Church, the Upper Lansdowne School P & C and was treasurer of the Upper Lansdowne Hall committee for many years. He also took on the role of ticket seller at the door for most functions at the hall especially the annual Balls.

Eric joined the Upper Lansdowne Manchester Unity Lodge in 1947 and remained an active member of the organisation continuously until his passing in 2013. After Upper Lansdowne Lodge closed he moved to the Taree Lodge. He held various positions including District Grand Master numerous times, the first in 1959/60. Each year he would attend the Annual State Conference as a delegate. In the early 1960s the District Conference was actually held at Upper Lansdowne Hall. Eric received a merit badge in 1960 and in 1990 and also received his 50 years of service badge in 1996. The Lodge was the main social outlet for many years for Eric and Norma until they moved to Taree. Once they moved to Taree, Eric became involved with Taree Probus Club, The RSL Golden Oldies Club, The Retired Air Force Association and Taree West Bowling Club and was still active with the Taree West Bowling Club and Retired Air Force Association right up until he died.