Skip to content
Eric John Ritchie was born at Upper Lansdowne on 25 May 1924 the 5th child of Arthur James Ritchie and Mary Jane Currie. He attended Upper Lansdowne School until the age of 12. After leaving school his first job was working at the Atkins timber mill at Lansdowne making broom handles. He also worked on Claude Cicolini’s farm at Upper Lansdowne.

Eric was aged 17 when he enlisted at Upper Lansdowne on 3 April 1941 (having lied about his birth year) and stated his father Arthur Ritchie as his next of kin.

After enlisting in the Australian Army, Eric was taken to Tamworth where he did his training. On 29 July 1941 he embarked overseas arriving in Singapore on 16 August 1941. On the 26 September 1941 Eric was posted to 2/20 Australian Infantry Battalion. On the 16 February 1942 he was reported missing having been taken as prisoner by the Japanese. He was first sent to Changi prison and later transferred to a prison camp in Okanawa in Japan.

On 5 September 1945 he was liberated from the prison camp in Japan and taken to Manilla. On 29 September 1945 Eric embarked for Australia and was discharged on 2 April 1946.

Eric’s brothers Victor and Ray also served in the Australian Army in WW2.

After the war Eric took up dairyfarming at Blackhead. In 1951 Eric married Catherine McFadyen. In 1952 they moved to Upper Lansdowne where they sharefarmed the Cicolini farm. Later the family moved to Comboyne where Eric was cutting corkwood leaf. From 1956 to 1962 Eric dairy farmed, first at Kimbriki and then at Wherrol Flat before running a shop in Taree for 8 months. In 1963 he started farming at Oxley Island. While at Oxley Island there was a terrific drought and the Government bought out drought relief for the farmers and Eric worked for the Public Works where he got paid. He built reservoirs etc. Eventually Eric left the farming life and started working for the Public Works full time and bought a house at Old Bar. During his time working for the Public Works he was sent to Eden and Tathra and then the Central Coast. In 1983 Eric and Catherine purchased a house at Lansdowne where they retired. After his wife Catherine died in 1987, Eric moved into a house at Harrington that his father had built. Eric died in 2002. 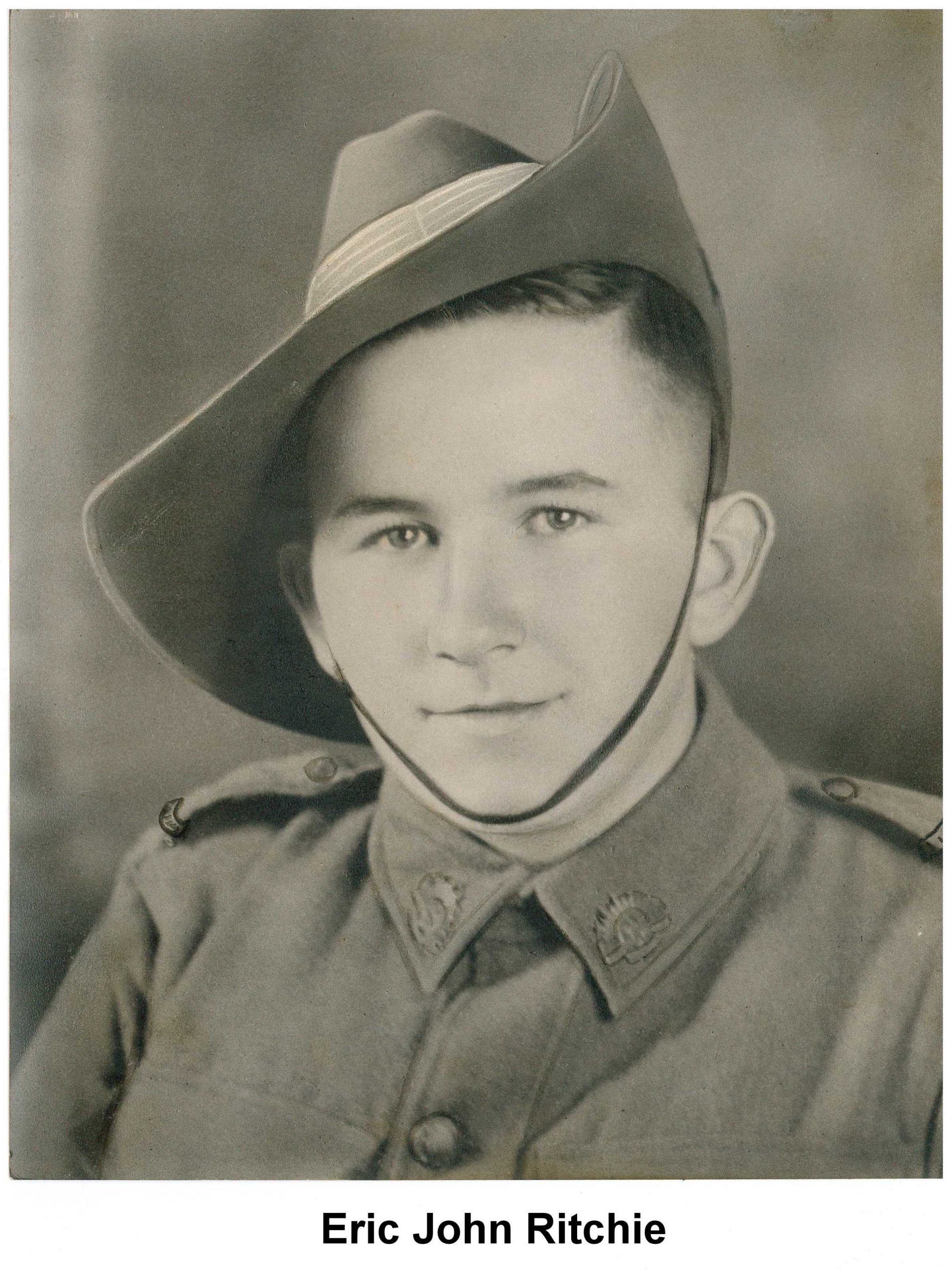 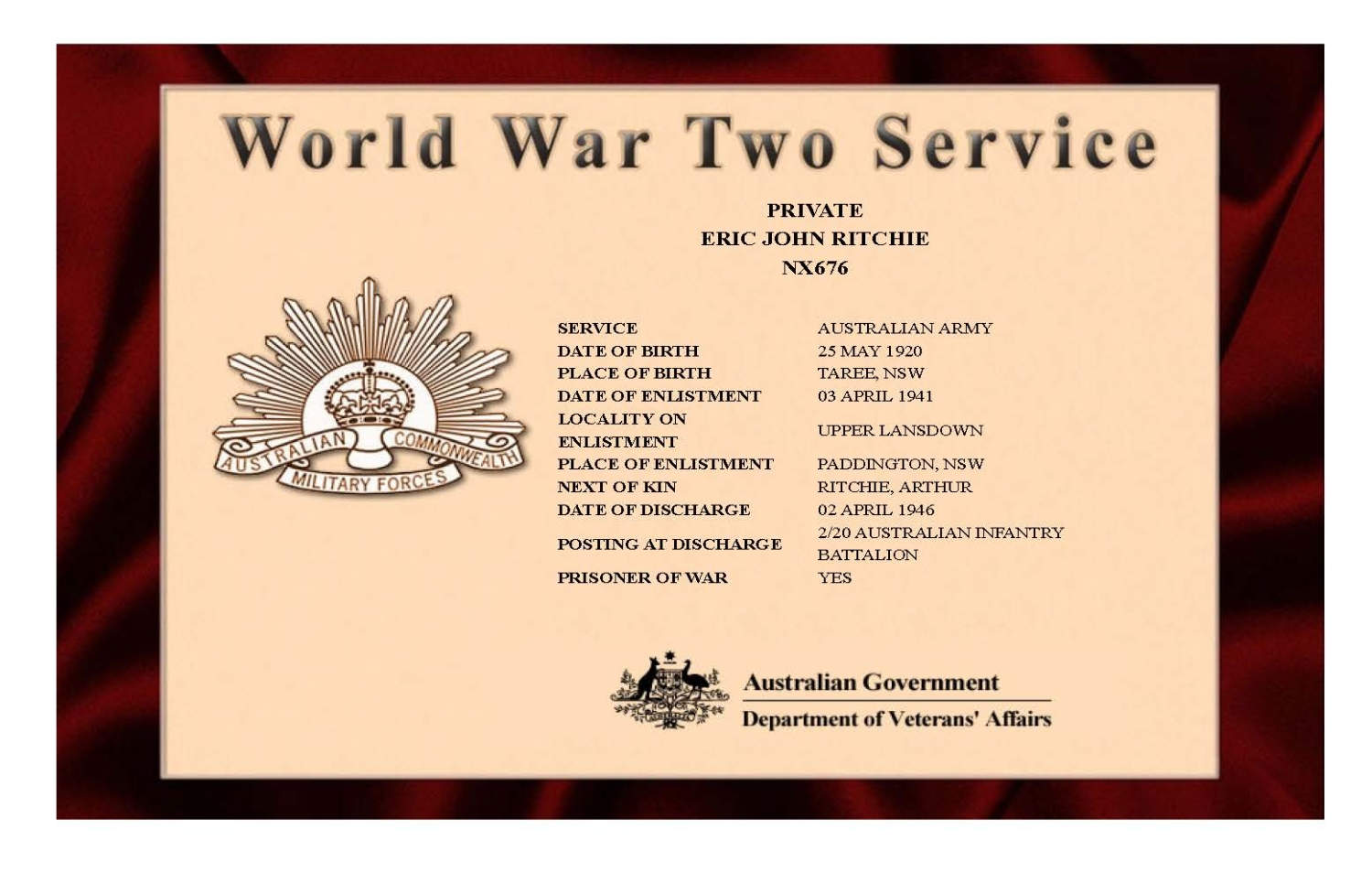 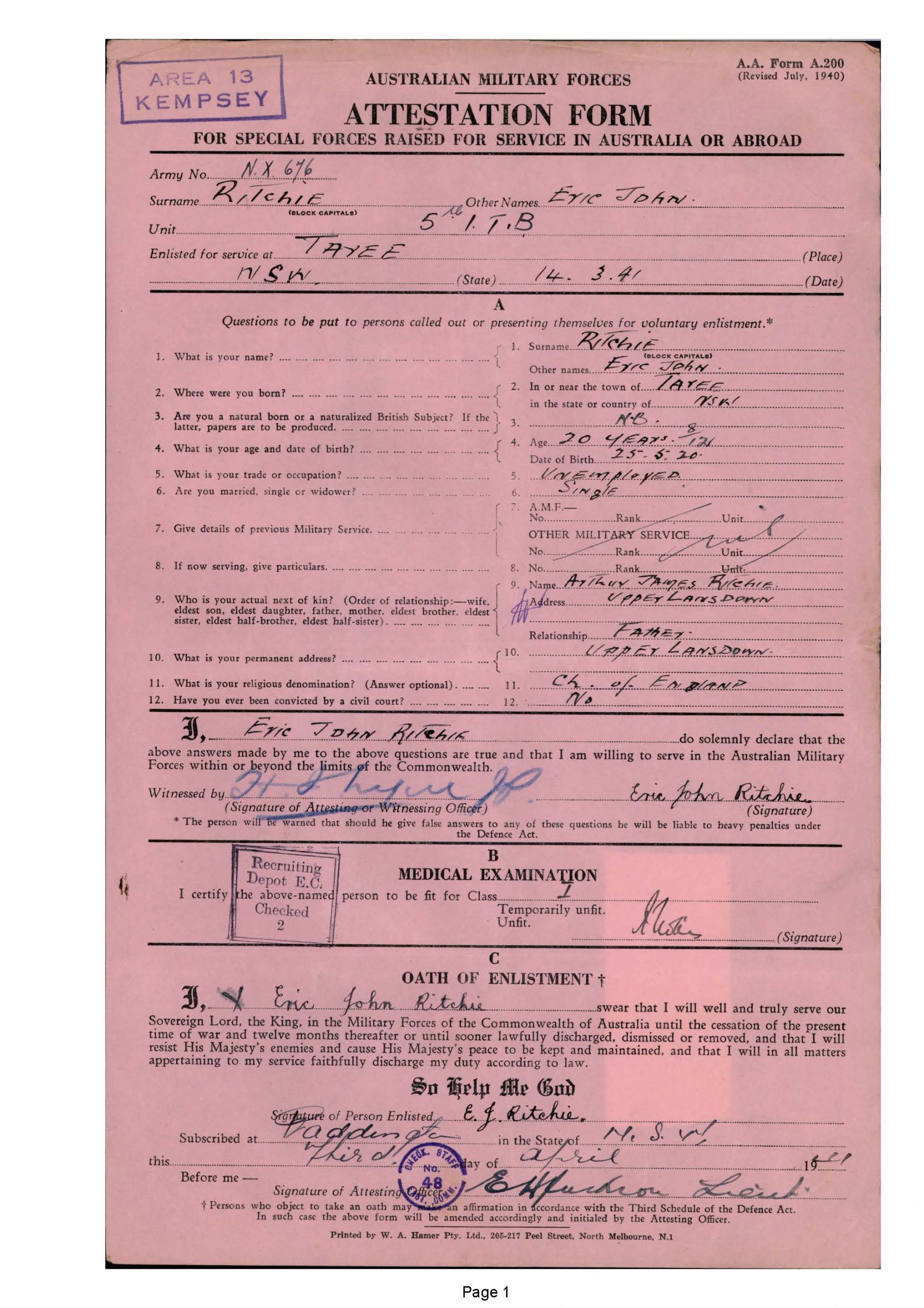