George was born at Yarrawonga, Victoria but was living with his wife, Alice Ivy, at Cundletown when he enlisted on 11 November 1916 at Taree. He was 22 years of age and engaged in farming. George was allocated to the 1st Machine Gun Squadron, March 1917 Reinforcements and following initial training embarked on the “Boorara” at Melbourne on 10 May 1917. On his arrival at Suez on 20 June 1917 he was immediately sent to an isolation camp for a week before he joined the 3rd Light Horse Training Regiment. On 19 April 1917 he was hospitalised at Abbassia with diarrhoea. His mother, Mrs E. Wallace of Upper Lansdowne, sent a letter to the army on 13 August 1917 stating: ‘My son enlisted last November and was sent to Seymour Camp he was in the 25 Machine Gun Depot he went down there some time in January last and I not heard from him since. Would you kindly send me his address if possible as I am anxious to hear from him and his brother is in France and I would like to find him. His name is G.C.J. House, he enlisted in Taree, trusting to hear from you soon.’ George was transferred to the 1st Australian Machine Gun Squadron on 29 July 1917. He was admitted to hospital at Abbassia on 19 November 1917 suffering from diarrhoea, remaining there for three weeks. He was taken on the strength of the Machine Gun Training Squadron on 12 December 1917, proceeding to the Squadron on 20 December 1917. George returned to hospital on 29 June 1918 at Wadi Aiya and was transferred to the 14th A.G.H. at Port Said on 5 July 1918 suffering from malaria. He was discharged to a rest camp but contracted bronchitis while there and was re-admitted to the 14th A.G.H. George finally returned to his unit on 5 October 1918. George finally returned home on the “Orari” on 15 May 1919. 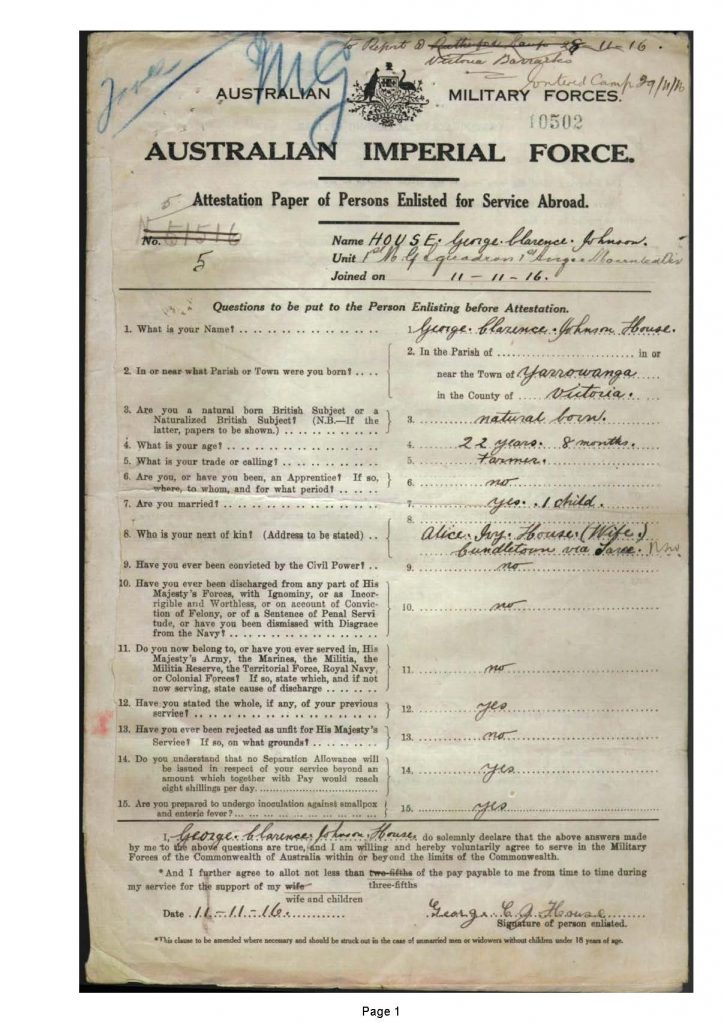 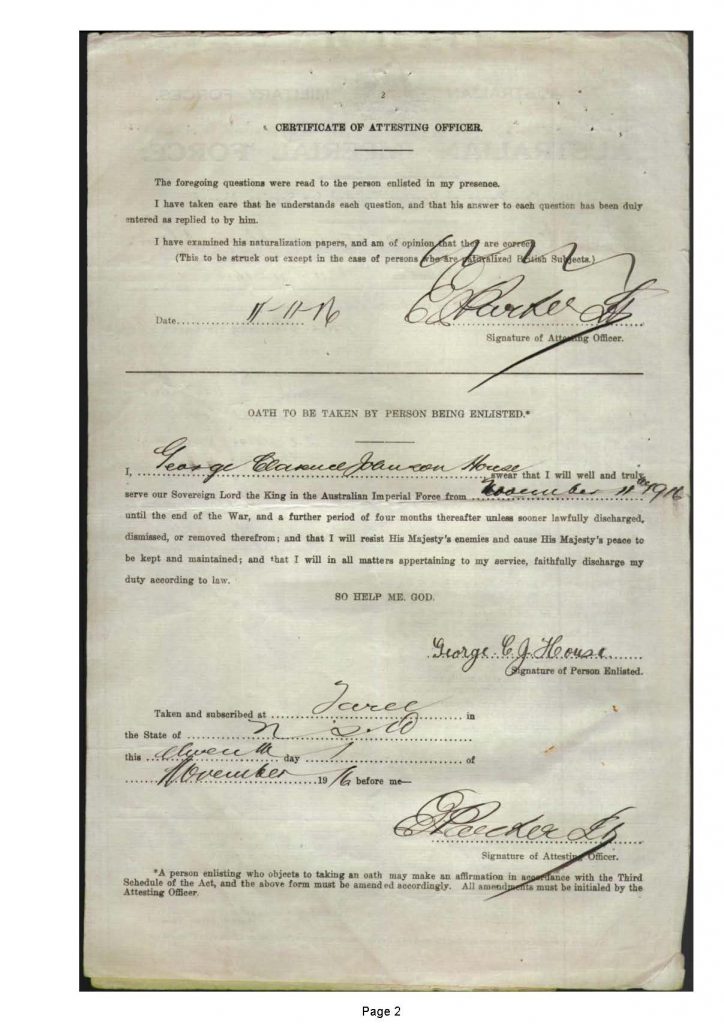 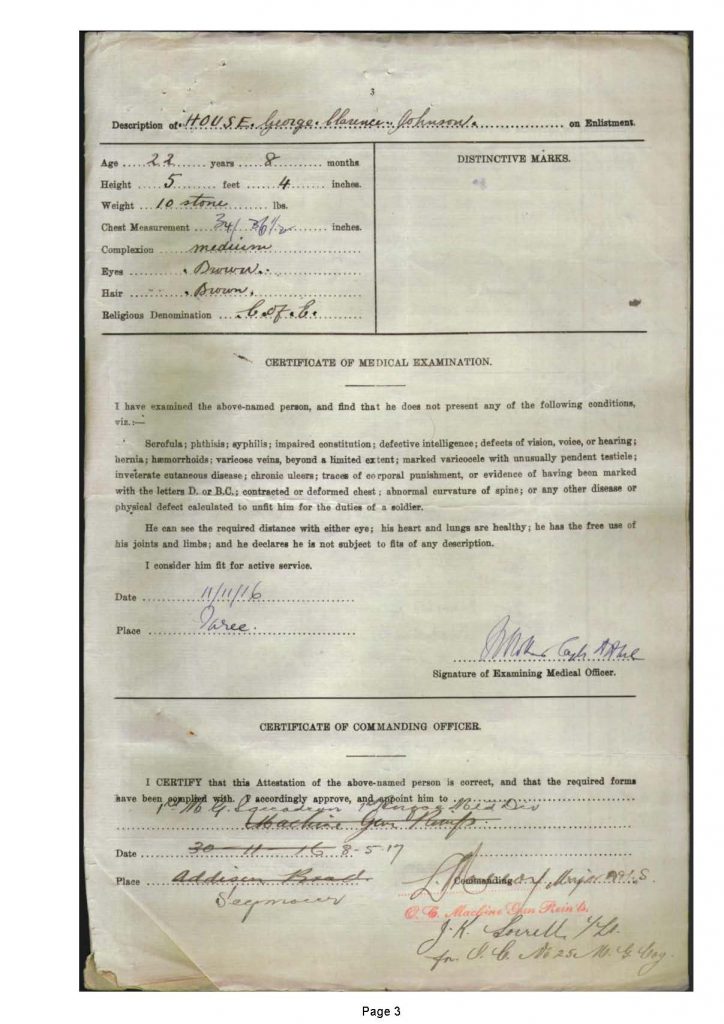 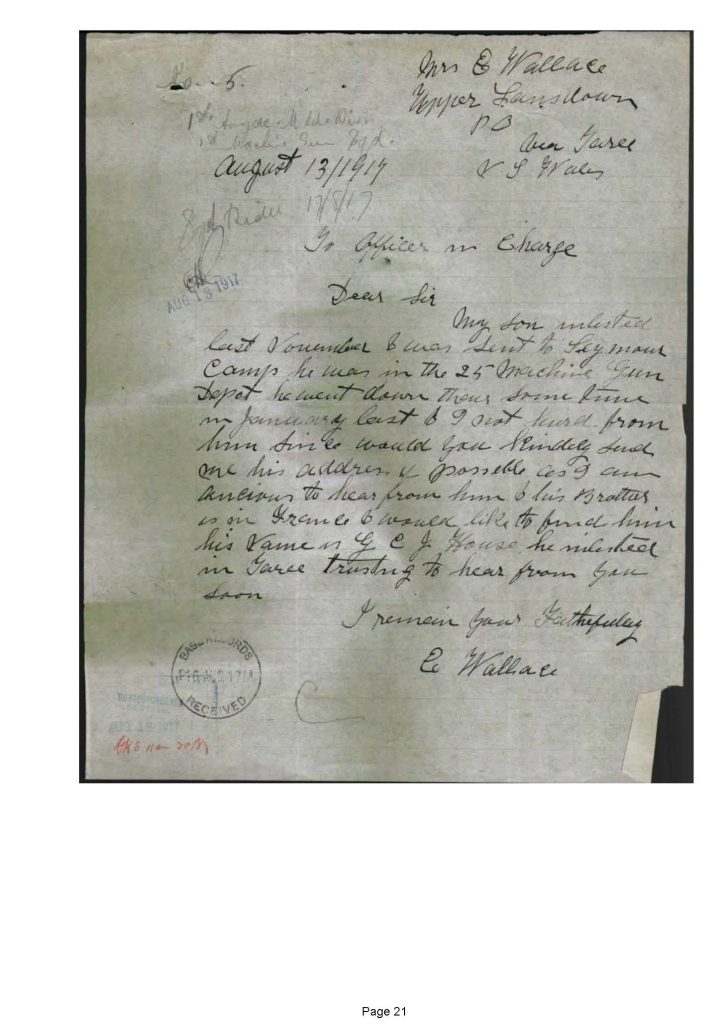