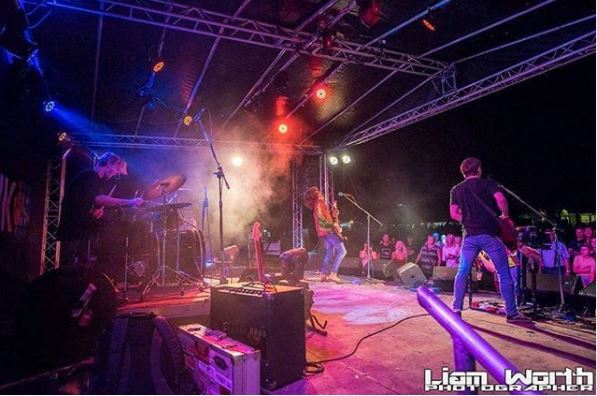 This show is outside on the grass (weather permitting). Wet weather arrangements are described here

This show has been moved from Sep 21 and is now a special, dual headline show with The Swamp Stompers + The Corey Legge Band.

Corey Legge is the lead guitarist/vocalist from The Swamp Stompers who has started a new band and this is their album launch tour.

The Swamp Stompers play funky rock and blues with heavy grooves and if you like that sort of music you’ll love these guys, because they sound like the musical lovechild of The John Butler Trio, Led Zeppelin, and Red Hot Chili Peppers.

Searing slide guitar, contrasting dual-lead vocals, catchy guitar riffs and dubstep inspired didgeridoo soundscapes give this original blues-rock band an irresistible flavour combination that has earned them a reputation as one of the most promising up-and-coming Australian acts to emerge in recent years.

The powerhouse trio has stomped their mark on festivals such as Caloundra Music Festival (QLD), Blues at Bridgetown (WA), the Sydney Blues & Roots Festival (NSW) and our own Lakeside festival in Forster/Tuncurry with rave reviews from punters and peers alike.

Corey’s most popular single to date ‘I Don’t Know What I’ve Got Myself in For’ landed at #2 on the Australian Country Radio charts, which led to five film clips being added to CMT on Foxtel. Corey’s music has also been shared by the legendary James Taylor.